Day Crafting Today / Reset your days to your internal clock.

Reset your days to your internal clock

Imagine a clock that told you personally when it was your best time during the day to do certain tasks – such as the optimum time to do analytical thinking or to have a difficult conversation. The best time to eat carbohydrates or to drive or to have sex. This clock could be fairly specific and handle conditions, for example it could tell you when to exercise to perform at your best, or to lose weight or to raise your mood, or to build strength or avoid injury (each of these conditions would give a different time). It could give you a surprisingly long list of optimum timings – like the best time to make a sale or take medicine, to learn something, to drink alcohol, visit the dentist, solve creative problems and get out into the sunshine, to go first – or not, to work on through or to take a break. And unsurprisingly, when to get up and when to go to bed. 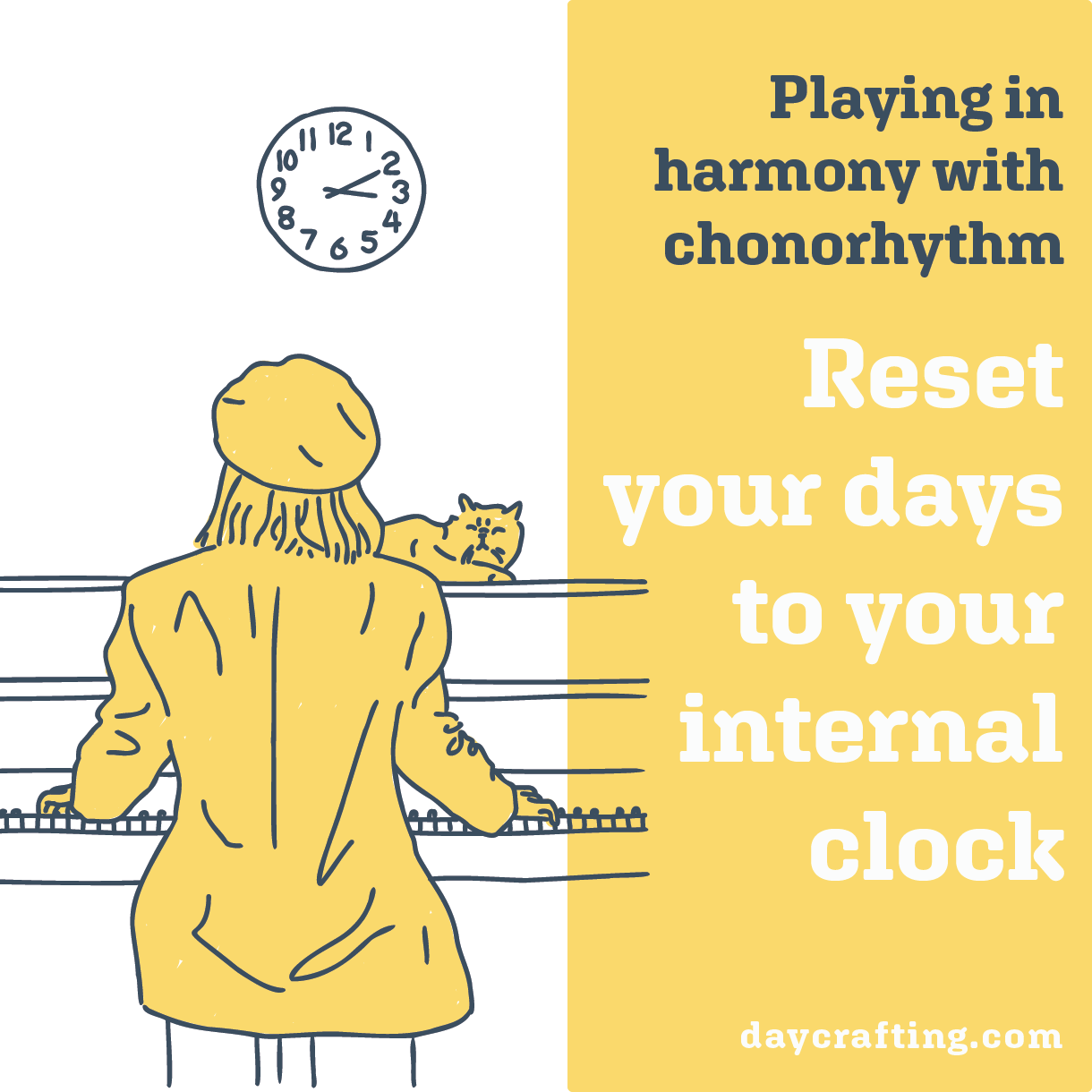 What would your days be like if you followed this personal clock of optimum timing rather than the clock on the wall or the schedule in your diary (which may be shaped by no more wisdom beyond plonking meetings into free gaps)? For starters you would be a lot happier and healthier and have more energy with which to be more productive if that is what you wanted to use the energy for.

We could call the clock on the wall social time, in that it is a fairly recent invention of society. And the wonderful, personal clock of optimum timing – we could call your chronorhythm, or circadian or biological rhythm if you prefer. This chronorhythm clock, your clock, is unique to you and it would be very rare for it to run to the regimented 24 hours of social time – hence being called circadian (around a day). In fact the average runs to around 24 hours and 15 minutes. (Our chronorhythm mostly uses the light of a third clock, sun-time to adjust to a 24 hours period in a process called entrainment.) Of the three clocks, sun, social and internal, we undervalue the latter to our cost. More and more people are reclaiming the benefits of shifting from GMT (Greenwich Mean Time) to CMT (Circadian Me Time).

Your internal clock, your chronorhythm is hard-wired-biology and could be dramatically different from another’s or from the population average. For example, if we were to measure the midpoint of your sleep, if you were an extreme early riser, that midpoint could be 12 hours earlier from the sleep midpoint of an extreme late riser. Why do humans across a population show such divergence? One hypothesis is that it protected the tribe during the night – just as the teenagers are finally nodding off in the early hours, the older folk were leaping sprightly from their beds. For extreme chronotypes our artificially regimented 9 to 5 industrial society is a challenging place to be. It can also be a challenge within a household if chronotypes differ dramatically – think of those teenagers again.

The majority of the population are not at the extremes. Around 65% of us rise around 7am and hit the sack at around 11pm and society is optimised to suit this group. Early risers tend to adjust to fit this routine, packing in some useful, undisturbed productive hours before the majority get into work-gear some time later – but find later evening social events challenging. And these two groups also experience fairly similar energy and cognitive rhythms across their days showing a rise, dip and rebound of energy during the waking hours. Fitting in is most difficult for the late risers who’s optimum sleeping hours, cognitive and energy rhythms differ the most and run in a different order.

There is research to show that different chronotypes display different personality characteristics (such as larks being introverted leaders) but it is easy to misinterpret this deterministically. And there seems to be a moral assertion that chronotype is a productivity choice – the early riser is much lauded worldwide: if in the UK the ‘early bird catches the worm’, in Russia it is the ‘early riser who gets the mushrooms’ (whilst everyone else collects nettles).  (A few more idioms: in Germany the ‘morning has gold in its mouth’, in Sweden the ‘first to the mill gets to grind first’, and in Italy ‘he who sleeps catches no fish’.) Despite all the hack-your-day advice about getting up earlier, you can’t change your chronotype – all you can do is mitigate the side-effects of shifting out of your chronorhythm.

But your chronorhythm might change itself. Chronotype, although a fact of our biology, changes during a lifetime. From our late to bed, late to rise preference as older teenagers, we tend to shift to being earlier chronotypes as we age and men and women experience these changes at a different pace. If you remember being a late riser when you were a teenager it is perfectly normal not to be later in life. By the way, babies (as with some elderly people), may not strictly be on a circadian rhythm but instead be on a ultradian rhythm which is shorter than a day.

If you’re in any doubt which chronotype you are, there is a fairly accurate way to work it out if we split the population into four common types. Think about what your natural sleeping pattern would be during a holiday period or on a rest day when you didn’t need to get up at a particular time. Then work out what your midpoint of sleep would be. If it is before 3.30am then you’re an early chronotype. If it is between 3.30am and 6.00am you’re an average chronotype. And if it is later than 6.00am you’re a late chronotype. A lark, a finch or an owl. I said that there are four common types – so it may be that if you don’t fit into any pattern and find sleep unpredictable, you’re a ‘problem’ sleeper, but you probably knew that already.

Working in harmony with our individual chronorhythm has become the foundation of my work with Day Crafting Apprentices. Once we’re aware of our chronotype and our own optimum timings for types of tasks, we can turn our to-do list into a when-to-do list. Days designed this way see more done with less effort and the quality of what we’re doing improves. And with experience we can mitigate for the times when we’re forced to go against chronotype. We can even spot opportunities to optimise timings involving others and their chronotypes to our advantage. For example, if you’re able to influence when something critical involving other people should happen, like a meeting to discuss a contract, or to make a creative decision, you can schedule the meeting to benefit the kind of cognitive work involved.

There is a time of day that is better for logical but not especially creative thinking and visa versa – and a time of day when, depending on the nature of the work, taking breaks is critical to our performance. And as previously mentioned, a long list of time-optimised scheduling for each of us, from aerobics to zzzz. Our circadian rhythm is about more than sleep timing – although that is the most critical aspect of your overall chrono-performance to optimise. Many of our hormones, and therefore the behaviour that those hormones help or hinder, are triggered by the same internal clock. General advice would be to work with those natural rhythms, getting early exposure to natural light, delaying caffeine until the morning flush of cortisol has done its job of waking us up naturally and scheduling the day’s tasks to match cognitive suitability and energy levels.

Maybe we’ve been looking in the wrong place for the good life. It’s not the prize, off in the future at the end of a process borrowed from sports or business coaching, but is there in the steady daily rhythm of the craftsperson free of the industrialist’s 9 to 5. Annie Dillard wrote, ‘How we spend our days is, of course, how we spend our lives’. To craft a good-life we need to bring our attention to the working surface – the rhythms that balance our energy and rest across today.

Introductory Workbook – Learn Day Crafting at your own pace

In this post you will find some photos from the workbook, a free sample to download containing a range of example pages and a link to buy the book.

Crafting freedom from the hidden rules we allow to govern us

Last Wednesday the power went off. It was planned. Someone from the power company told us this was going to happen from 9am with power back estimated at 4.30pm. So, as a family all at home in lockdown we scheduled a special day of doing a lot of unplugged things. Including going for a walk after lunch.